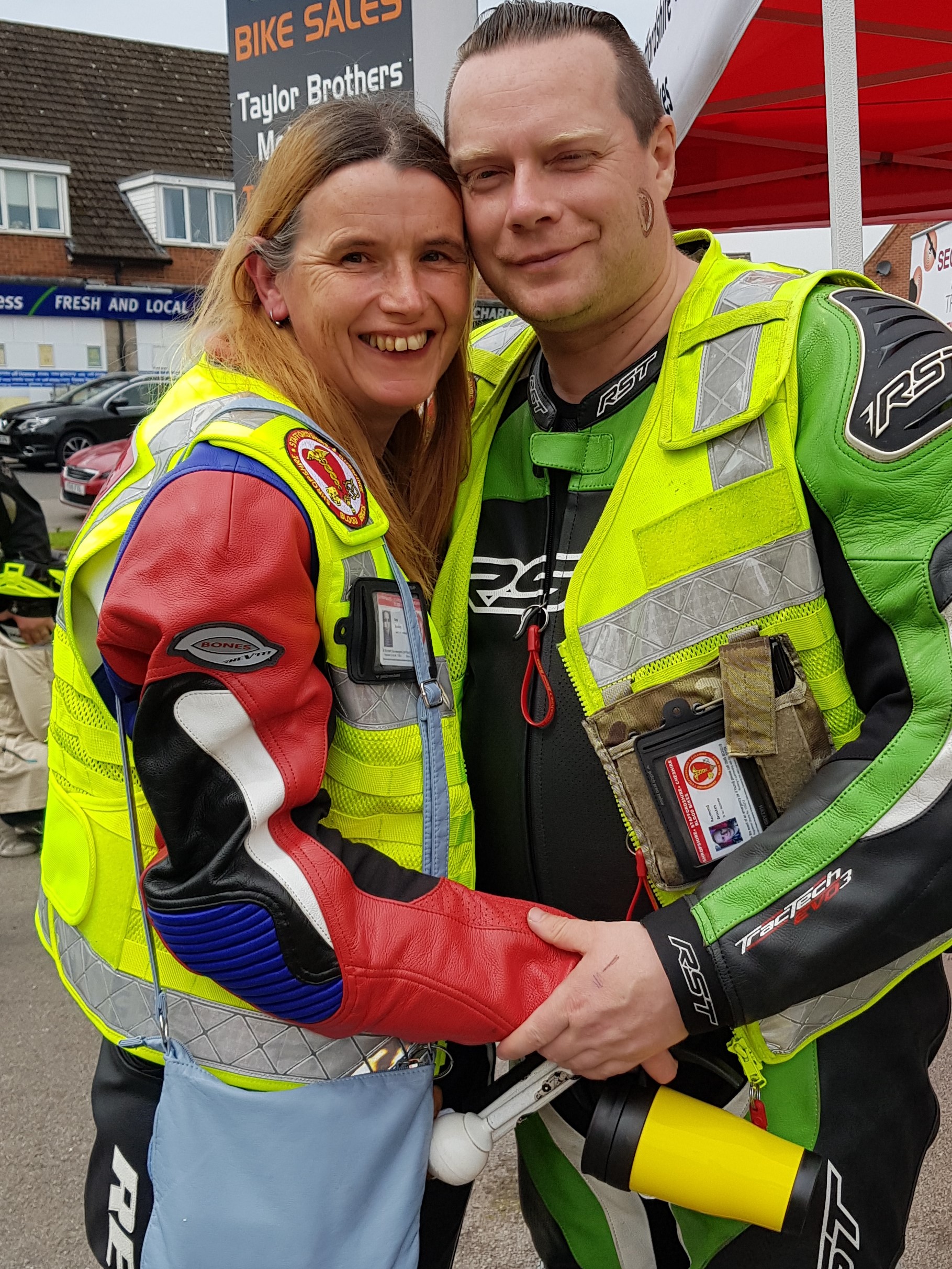 People join SSCBB for many reasons, simply to help, to give something back in response to perhaps a loved one calling on the NHS in an hour of need. But as many people find that’s just the start and it turns into so much more. Kath Brookes one of our most experienced controllers tells us her story.

Around the same time that SSCBB carried out its first job, myself and my family moved back to Staffordshire after several years of moving around from place to place with the armed forces. We settled in Newcastle-under-Lyme around the corner from where I grew up and set about settling down in “civvie Street”. It was very different to army life, my husband was working and living away and only home at weekends when work allowed. He could be away on tour for several months at a time. I was responsible for two children, one with autism and although I had some family near, I missed my army wife community and the friends I had made terribly.

As bikers, we had been to various events around the area and seen the Blood Bikes stand and commented to each other what a great charity it was, but husband was busy with work and I assumed that as I couldn’t ride a bike and being visually impaired, I wouldn’t be able to help. All that changed in July 2017 when I went to a talk at my local church St Mary’s, Knutton. There I became aware of all the different roles within the charity and discovered that actually there was more to Blood Bikes than riding. August came and I had still done nothing, then one night I happened to watch the Ambulance programme which featured a blood biker (who I now know to be Nigel Bundy a founding member). This gave me the kick I needed, and I sent an email enquiring about becoming a volunteer.

The necessary paperwork was done and the training completed and before I knew quite where I was I found myself signed up as a Controller and sat in front of my laptop with sweaty palms, a nervous feeling in my stomach and dreading the phone ringing! Yes, somehow, I was on my first shift! The rest is history, I took to it instantly and absolutely loved it, signing up for many shifts through both day and night. So why do I do it? Well I get a great deal of satisfaction from helping the NHS in some small way and knowing that I might be helping to save a life, or at least improve a patient’s situation. But for me there is more than that, I can’t work because our son needs an adult to be around and I am that adult! I can Control from home and still be there to meet his needs. My involvement with SSCBB has helped me build a new life outside the army, I have made new friends and had great times at fundraising events all whilst raising money for a great cause. I have improved my confidence and gained new skills all whilst helping others. It has given me a purpose and something to focus on during difficult times and kept me sane whilst my husband has been away for long stretches. Over time I have taken on extra roles within the charity, helping to train new controllers, write thank you letters and coordinate Faecal Matter Transplant deliveries with other groups plus helping out at events, raising awareness and fundraising. I really feel privileged to contribute to such a fantastic charity and me and my interesting leggings will be around for a long time to come!

Kath’s leggings are often one of the highlights at SSCBB fundraising events!